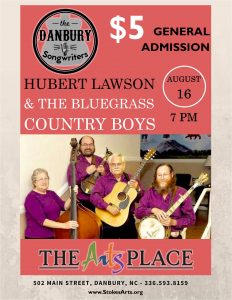 The Danbury Songwriters series presents a special 2 hour show with Hubert Lawson & The Bluegrass Country Boys at The Arts Place of Stokes on August 16, 2018.

Hubert and Vera Lawson and their sons, Lee and Eddie, organized their family band in 1980 with the goal to provide great traditional and modern bluegrass, country, square dance music, occasional rock and roll, and often some of their own original compositions. Since then, they have played everywhere up and down the east coast and have released five CDs so far. Along the way, Hubert and the band have played shows with Doyle Lawson & Quicksilver, Jim & Jesse McReynolds, Bill Monroe, Jimmy Martin, The Lost & Found, The Tony Rice Unit, Ralph Stanley & the Clinch Mountain Boys and others. A good time is absolutely guaranteed!